The Soul of Europe and the Germanic People 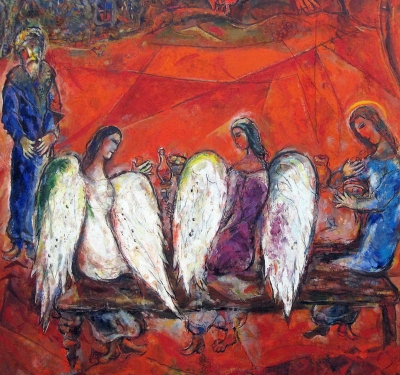 Picture: M. Chagall - Abraham and the Three Angels (1960-1966.) Abraham meets three mysterious heavenly messengers, then he says: "In this city there are perhaps 50, 45, 40 honest people, "10" righteous people are enough to save a damned city ... the "guilty people" will continue to live ...” a biblical reference which helps us understand that the true majority of a population is not based on statistical data but rather on its qualities. The true representatives of the populations should be their best citizens; they are the "true majority", since they embody the past, present and future "majority".

Colonialism began in Europe and, just like a boomerang, has returned to Europe after the onset of National Socialism.

The German people are not to blame for this phenomenon; in fact, when cancer affects an organ, this is not due to the organ itself, but rather to the whole body which has generated it: Empire, Antisemitism, Capitalism, Colonialism, Communism, Mafia, Freemasonry, Patriarchal Family, Slavery..

After all, the true representatives of a population are its best citizens (for "10" honest persons it may be worth saving a whole guilty city ... "guilty people" will continue to live ... the Prophet Abraham): they embody the past and future majority.

The true majority of a population is not represented by the current statistic data, but rather by its present qualities.

This is the old Europe, but now the so-called European Union is full of holes (consider, for example, the management of migration flows.)

There are conflicts between all the members of the Union, this United Europe can boast a flag (it just lacks a national anthem), but politicians are not able to reach an agreement, they have just abolished the national frontiers and, to the advantage of international business and multinational corporations, have introduced a single currency which have got us into trouble.

Considering the foregoing, it would have been better to leave things as they were.

There is no "majority" and, even if it existed, it would rarely be a real “majority”: in fact, the true majority must embody the needs of the weak over the time, both from a logical and a historical point of view, not only in the present but also in the past and the future; it is the heart and brain of the people.

This proves that the German people, if they still exist, are and will always be revolutionary, internationalist and "communist," i.e. they will always generate other nations.

Then long live the Germanic people, long live all the people!

We must forget our dreams and reject the old beliefs and friendships prior to life. Never mind this Europe, which always celebrates men and yet does not miss an opportunity to wear them down, along its streets throughout the whole world.

For centuries, Europe has stopped the arrival of other men and has enslaved them in the name of its projects and glory; during these centuries, the alleged "spiritual adventure" of few individuals has almost killed mankind.

Now it is going through an atomic and spiritual disintegration.

Every movement of Europe has expanded the space and thought limits.

However, Europe has rejected humility, modesty, care and even tenderness. It was never thrifty, but rather carnivorous and murderous.

Then fellows, stop following this Europe.

Europe must stop playing this game, it’s time to change the tune.

We can do anything, provided that we do not imitate and obsessively please this Europe. But that's not all.

More in this category: « Europe and the Secret History of Italy The evils of Europe – The European Spiritual Adventure »